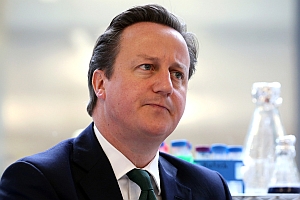 British Prime Minister David Cameron speaks with scientists before opening the Li Ka Shing Centre for Health Information and Discovery at Oxford University on May 3, 2013 in Oxford, England. Counting was under way in England on Friday in local elections which are expected to deliver a drubbing to Cameron and confirm the rise of the anti-immigration UK Independence Party. AFP PHOTO/POOL/OLI SCARFF